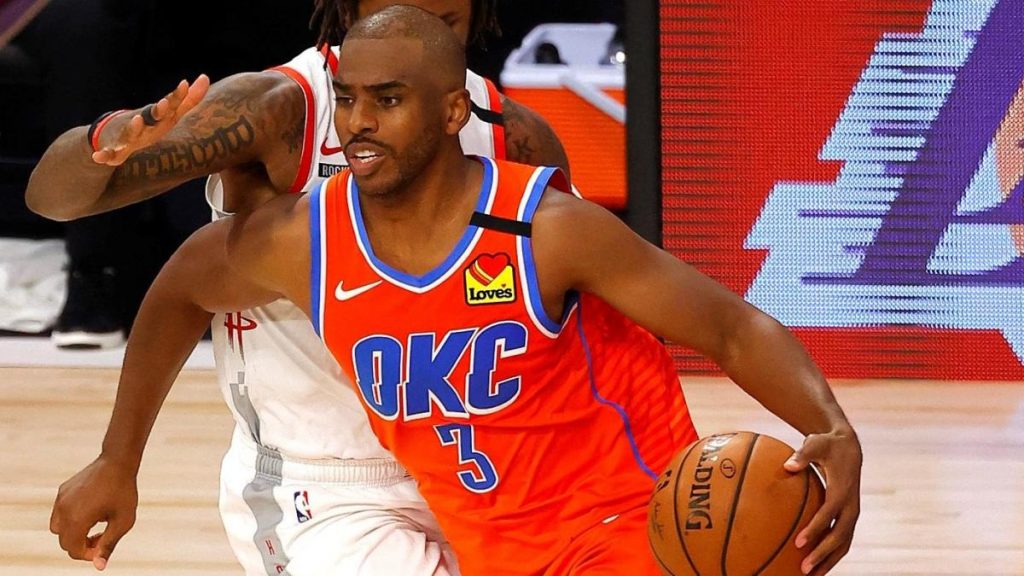 The Oklahoma City Thunder are still alive. After double digit losses in Games 1 and 2 of their first-round series against the Houston Rockets, the Thunder bounced back in Game 3 with a wild 119-107 win in overtime to make the series 2-1.

In the first two games of the series, the Thunder struggled to score the ball, but their defense falling apart was the biggest problem. They stepped up on both ends of the floor in Game 3, getting to the free throw line to give their sputtering offense a boost, and holding the Rockets to 30 percent from 3-point land. Dennis Schroder went for 29 points off the bench, while Chris Paul finished with 26 points, six rebounds and five assists.

Houston was once again without Russell Westbrook due to a quad injury, but still had a great chance to go up 3-0. They couldn’t hold on down the stretch, however, and once James Harden fouled out early in overtime, they fell apart. Harden finished with 38 in a strong performance, but Jeff Green was the only other Rocket to have a solid offensive day. Those two were 20 of 40 from the field, while the rest of the team went 18 of 52.

Here are some key takeaways from the game:

Thunder give themselves a chance

The Thunder had a tough time in the first two games, losing by double digits in Games 1 and 2 to fall behind 2-0. After those two results, what was expected to be one of the most competitive first-round series was suddenly looking like it could be a sweep. Oklahoma City made sure that didn’t happen, coming through in the clutch to secure the win and give themselves a chance in this series.

Since only 21 teams have come back from a 2-0 deficit in a seven game series, the most recent being the Toronto Raptors last season in the Eastern Conference finals. That’s not very many, and it shows tough the Thunder’s task is over the next three or four games. But no team in NBA history has ever come back from a 3-0 deficit.

If they lost this game, they might as well have packed up and left the bubble. It wasn’t pretty, but credit to them for grinding this win out with some big plays down the stretch and in overtime.

Schroder shows why he might win Sixth Man of the Year

When Dennis Schroder was traded to the Thunder, he had to readjust to life as a sixth man. His first season backing up Russell Westbrook was solid, but he really took off this season. He put up 18.9 points, 4 assists and 3.6 rebounds per game, while shooting a career-high 38.5 percent from 3-point land.

His play off the bench, and alongside Paul and Shai Gilgeous-Alexander in the Thunder’s dominant three-guard lineups, made him a leading candidate for Sixth Man of the Year. That award hasn’t been announced just yet, but Schroder is one of the three finalists, and on Saturday he submitted further evidence why that’s the case.

He went for 29 points in the game, tying his career-high for points in any game, let alone the postseason, and added five rebounds, five assists and two steals. And though he didn’t score in overtime, he was huge in the fourth quarter, scoring 10 points in that frame, including a huge 3-pointer with just over a minute left to cut the deficit to two points.

There’s no chance the Thunder win this game without Schroder stepping up.

How about Jeff Green?

The Rockets didn’t get the win in Game 3, but it certainly wasn’t Jeff Green’s fault. The oft-maligned swingman is on his eighth team in five years, but he might not have to move again if he keeps playing like this. He was in double figures in seven of the eight seeding games, and has been awesome in the playoffs so far.

Against the Thunder in Game 3, he was one of the few Houston players to show up on the offensive end, going for 22 points on 8-for-13 from the field and 5-for-8 from 3-point land. He also added seven rebounds, three assists, a steal and two blocks. The only Rocket with more points in this one was James Harden, and Green’s hot shooting was one of the main reasons they even had a lead at all.

For the series, Green is now averaging 19.7 points and 6.7 rebounds, while shooting a stellar 52.4 percent from behind the arc. In the three games, the Rockets are plus-46 with him on the floor. Often playing as the five in Houston’s extra-small-ball attack, Green creates some real matchup problems for the Thunder on the defensive end, especially if Steven Adams is in the game.

Obviously the issue with Green has always been consistency, so he might go cold at any minute. But he deserves a lot of credit for what he’s bringing to this Rockets team right now. His offensive production has been massive with Westbrook out.