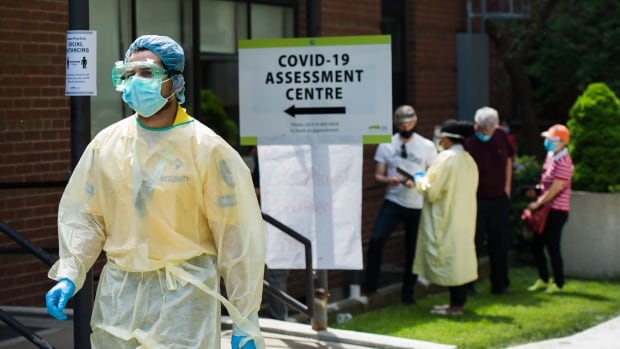 The highest percentage of cases were in Toronto and Peel, 43 and 34, respectively. Ottawa and the York region only saw double digits in two and two health units, with 12 and 15 new infections.

In a series of tweets, Health Minister Christine Elliott said 29 of the province’s 34 public health departments saw five or fewer new cases yesterday, of which 21 confirmed that there were no new infections.

The province has seen a total of 42,554 novel coronavirus infections since the outbreak began in late January.

The employee, who worked from East Guillimbury Garage, has not been at work since Aug. 29 and is recovering at home, the Post said.

“All indications are that our employee was infected with the virus from outside the workplace,” Aikins said. “Although the risk to customers is minimal, we are letting people know that we are taking a lot of precautions.”

The agency said all MetroLinks employees and customers are required to wear face cover at stations, platforms, buses and trains.

He is the 11th employee of Metrolinks out of 4,300 staff to test positive for COVID-19.

The news came on the same day that Premier Doug Ford held a press conference at the Metrolinks management center to find out additional measures to keep transit riders and customers safe.

Ford said it has implemented more than 40 safety measures, including making seat dividers and face coverings mandatory on Metrolinks Geo trains and buses, providing hand sanitizers at all buses and all stations, and increasing services from September 5.

Meanwhile, the provincial official opposition, in an official request, said the ombudsman of Ontario must review the school plan from the public school to see that it meets safety standards.

In a letter released Wednesday by New Democrat education critic Marit Styles, she wrote that she wants the ombudsman to decide if the measures meet the criteria recommended by experts.

Styles notes in a letter to Paul Dube that the ombudsman included school boards, and many argued that an urgent investigation was needed to resolve the “confusion or concern”.

The Dube office did not immediately respond to a request for comment.

With only a few days to go before classes start, the Ford government is under increasing pressure on its COVID-19 pandemic back-to-school plan.

School boards, teacher unions and some parents have called on the government to make small class sizes mandatory and make funding possible so that physical distance in the classroom is possible.

The province’s strategy is to return students to school through the 8th grade in kindergarten with no reduction in class sizes, although students spend the day in the same set to limit contact with other children.

In an effort to curb the spread of the novel coronavirus, secondary students across 24 boards across the province do half of their classes online, although most high schools are in full-time class.

Ford has repeatedly defended its plan in recent weeks, claiming it is the best in the country and was created in consultation with experts.

When asked his response to the NDP’s request on Wednesday, Ford instead praised the work of principals in the school system and attacked the provincial teacher unions.

“Why don’t they pitch?” He said about unions.

“Instead of painting a picture of the Apocalypse why they are not positive [like] Will the world end? Why don’t they go there like the great principals I talked to [have]? ”

Ford stressed that his government was ready to return to school from next week.

Earlier this week, four of Ontario’s teacher unions appealed to the provincial labor council about school planning from Ford’s school.

They allege that it violates regional office laws and wants a series of changes to address concerns about lower class sizes and school ventilation.

The unions said the government had not consulted them on developing their school reopening strategy.

Government employees will return to offices from Tuesday

Ontario Public Service senior officials and political staff will begin returning to their offices next Tuesday, CBC News said in a memo. The return of other government employees will be phased in from September 28 to December.

New: Ontario Public Service senior executives and political staff will begin returning to their offices next Tuesday. The return of other government employees will be phased in from September 28 to December.
I love this memo ONgov I got it from the Civil Servant. #onpoli pic.twitter.com/vfHDTf04yt

Prisoner tested positive for the virus at Toronto East Jail

The province on Wednesday confirmed that a prisoner at the Toronto East Detention Center had tested positive for COVID-19.

The positive case was confirmed on August 30, Solicitor General Ministry spokesman Brent Ross said in an email to CBC News.

“The ministry is working with Toronto Public Health to mitigate any impact on staff and inmates,” the e-mail said in part. “According to public health advice, close contacts of any staff and inmates may be self-segregated and / or tested as appropriate.”

In May, the Ontario Correctional Institute in Brampton reported more than 75 cases of the virus.

Ontario prison staff were issued new regulations in March after a guard tested positive for COVID-19 at the Toronto South Detention Center.

COVID-19 1,236 active cases across the province

In today’s update another 137 resolved cases were reported by public health officials, a significant increase over the statistics commonly seen over the past few days.

COVID-19 There are now 1,236 confirmed, active cases across the province.

The official death toll in the province is stable at 2,812. But a CBC News Count, a measure of avoiding log times in the provincial reporting system, based on data from public health units, puts the real toll at 2,850.

The number of patients with COVID-19 cases in Ontario hospitals has dropped from 65 to 60. Thirteen of them were being treated in intensive care, while nine were on ventilators.

Ontario’s laboratories have processed more than 24,000 test samples for the novel coronavirus since the last update and added another 18,273 to the queue to complete.

Elliott found that the province now has more than three million tests.

All the figures in this story can be seen in the daily update of the Ministry of Health, which contains data up to 4 pm the previous day. The number of cases related to any particular area on a given day may be different from those reported by the local public health unit.