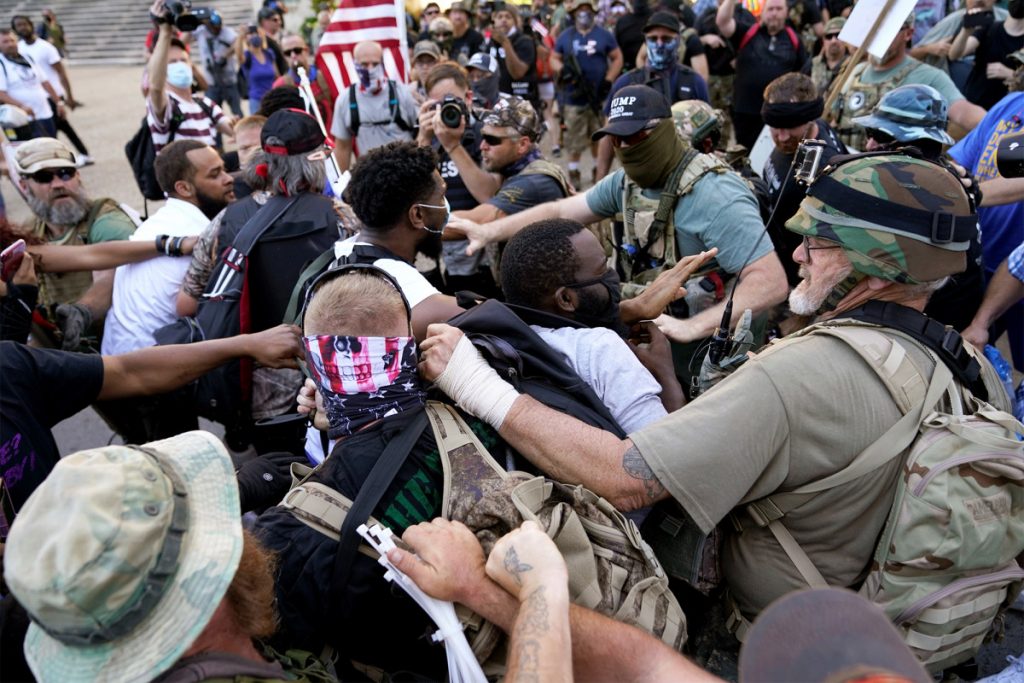 As the Kentucky Derby Day finally reached Louisville on Saturday, hundreds of armed militia members marched through downtown the city to confront Black Lives Matter supporters who had been performing for 101 consecutive days.

Hundreds of “patriots” carrying tall guns, some aving American flags or Trump flags marched from a parking lot to the downtown area, where a different group of protesters called for action in the Bryona Taylor case.

There was shouting between the two factions when it came to contact, but despite some tense moments the interactions seemed very calm. No police were present during the clash Local radio station WFPL, Although on some roofs and on nearby streets.

A group of Bryona Taylor protesters, some of them armed, chanted “Say her name: Bryona Taylor”, while members of the militia shouted “Blue back” and “USA!” USA! The shouts of who the real “patriots” are can be heard on both sides.

Anti-protesters have become a response to an online personality called “The Angry Viking”. According to the Louisville Courier-Journal. Dylan Stevens, the man behind “The Angry Viking”, told protesters he was not against them, and that his march would begin half an hour after they arrived.

This morning there was a meeting of two hundred heavy armed men at Cox Park in Louisville. Organizers say it was a “patriotic rally” in support of the police pic.twitter.com/lI6xpXEcV1

Stevens said he led the march to oppose a special group called the NFAC for the “Not F-King Around Alliance”, which the local media identified as a black militia. NFIC leader Grandmaster Jay said in July that he would “burn the city to the ground” if he did not do justice to Taylor.

As the armed militia groups began to leave the area, Louisville police officers who had caused the riots arrived at the scene, leaving only BLM protesters, WFPL reporter Ryland Barton tweeted.

“There is an active police situation on the back side of the track,” Washington said. “That’s why Churchill is taking extra precautions.” He did not give other details.

Police and the National Guard are already on guard at the track, as the coronavirus will not host spectators for the 146th run of the derby. The epidemic has delayed the venerable race by four months from its traditional date.