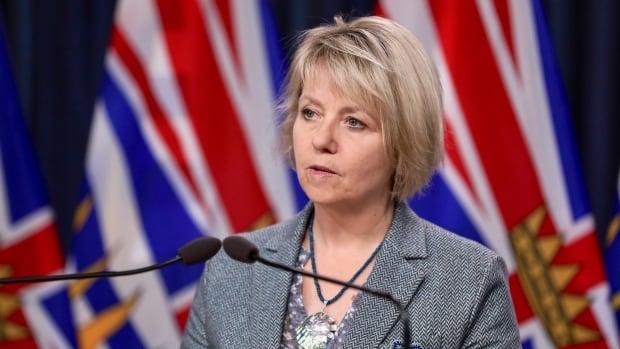 Regional health officer Dr Bonnie Henry said Monday that BC was in the second wave of the coronavirus epidemic because she had confirmed 499 new cases of Kovid-19 and two more deaths over the weekend.

“One can say we are in our second wave,” Dr Bonnie Henry told reporters Monday.

More than 150 cases were reported per day from Friday, with the largest single day total being 174 from Sunday to Monday.

Henry pointed out that despite the increase in cases, the province was not seeing “exponential growth” and that most people in BC were doing everything right.

A total of 11,687 people have been diagnosed with COVID-19 since the epidemic began, and 253 have died from disease caused by the coronavirus novel.

There were 67 people in the hospital, 19 of whom were in critical care. The province is actively monitoring 4,028 people in close contact with those with COVID-19.

Henry said the health care system has not yet sunk.

She said most of the cases were among young people who did not need hospitalization. The province is also seeing broadcasts in family groups and small groups, with large groups taking place in offices where needed.

“We have the potential to go into one of the fastest growing curves or waves,” she says. “We’re in a tricky place right now.”

‘We were able to relatively control the spread of our community’

Henry said the virus that causes COVID-19 continues to spread throughout BC, but the province is not registering new infections like in other parts of Canada.

On Monday, Federal Public Safety Minister Bill Blair said The Canada-US land border will be closed For all unnecessary trips until at least November 21st.

“Here in BC we were able to relatively control the spread of our community,” Henry said.

Groups of cases involve important services such as grocery stores and food processing plants, and contact tracers operate “around the clock”.

On Sunday, Fraser Health announced New outbreak of COVID-19 At a meat processing facility in Surrey, BC and at two long-term care homes.

Staff at Zion Park Manor, a long-term care center in Surrey, tested positive for COVID-19 and are currently home alone.

The facility has improved cleaning and control measures and Fraser Health is working to identify those who have been exposed.

During the six weeks of the school year, there was limited transmission and COVID-19 was not widespread, which was a sign that safety measures in schools were working, Henry said.

Henry reiterated the importance of following public health guidelines such as keeping groups small and wearing masks, and said businesses need to continue to follow their COVID-19 security plans.

“A lot of people took it wholeheartedly,” she says.

Parents need to communicate with neighbors to find out which houses are involved – and she understands that some children do not like to come to their homes.

Instead of shared candy bowls and homemade dinners, she suggests having a candy slide to hang individual candy packages so kids can hold themselves.

“This is not the year we go, hundreds of children in large groups are going to hundreds of homes,” Henry said.

“It’s not going to happen this year.”