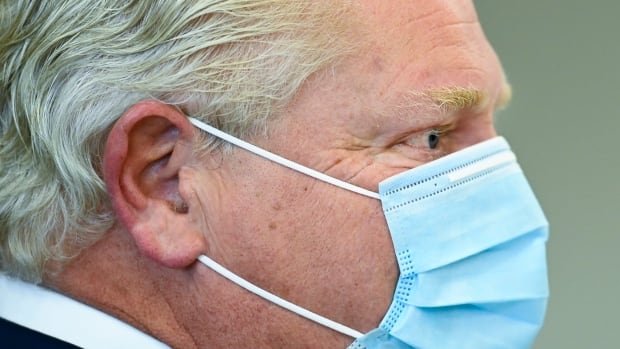 Ontario will release an updated modeling on Thursday predicting the course of its second wave COVID-19, as some epidemiologists already estimate the province will exceed 2,000 new cases per day by early December.

As Ontario sees a new rise in infections, recent comments by Premier Doug Ford suggest that the epidemic curve is flattening or going downhill.

Based on the growth rate of new cases in early November, Ontario is on track to 2,000 cases per day around December 1, according to recent estimates COVID-19 Modeling Cooperative. The team’s work – scientists and physicians from the University of Toronto, the University Health Network and the Sunnybrook Hospital – provided the province’s own modeling instructions.

“Given the policies we currently have, I don’t think there’s any reason to conclude that we can reach 2,000 cases a day,” said Ashleigh Tuit, an epidemiologist at the Dalla Lana School of the University of Toronto. Public health that is not part of the modeling cooperative.

“We have to start seeing a huge change in terms of sanctions to prevent it from hitting 2,000,” Tute said in an interview with CBC News. “We are on this trajectory and we are not doing enough at this point to change that trajectory.”

The regional government has placed only two of Ontario’s 34 public health departments on a “red zone” alert level: Toronto (Starts this weekend) and Peel area. In both areas, health officials determined that the province’s Red Zone sanctions were not enough to slow the spread of the virus and announced additional measures.

Modeling is expected to show not only the expected trend of new cases, but also the potential impacts for Ontario hospitals. The latest regional figures released on Wednesday show 424 hospitalized patients with COVID-19, 88 of whom are in intensive care.

The last time Ontario released modeling was in late October, when Ford indicated that this was good news. The day before the modeling was publicly released, “We saw the curve decrease,” no such thing was shown.

Modeling suggested Growth rate In new COVID-19 cases it is slower than in previous weeks, but infections are still on the rise. Modeling estimates that by mid-November, the daily average of new cases could be as high as 1,200 – the level of Ontario surpassed Wednesday.

In just five weeks, Ontario schools will begin the winter holidays. Tute sees the possibility that the province’s curve will be smoothed out as soon as people can safely celebrate the holidays with friends and family outside their home, without a change in public health restrictions.

“When there is no change, cases are less likely to go down by Christmas,” Tuit said.

“It doesn’t stop growing, by itself,” she says. “We have to do something to change the course of the epidemic. There’s no reform of reality where the virus suddenly stops growing on its own and by the end of December things look right.”

Williams, the chief medical officer of health, sees things differently. He acknowledged on Monday that all Ontarians practicing physical distance, not having close contact with anyone outside their home, and always wearing masks in public were “pretty aspiring”.

“If everyone does what they do … we can reduce the whole province to green (COVID limits) in three to four weeks,” Williams said. Based on the Province’s standards for the Green Zone, i.e. about 200 new cases per day, the Ontario rate has not been seen since early September.

Modeling the second wave of the COVID-19 pandemic is proving to be more challenging than the first, as many factors affecting the infection rate are changing. Among them: government policies and human behavior.

It makes no sense now to produce two-month-old models that will run in the future, because a significant increase in new epidemics could prompt people to change their behaviors or force the government to tighten public health restrictions, causing the epidemic to change.

This means that she cannot reverse when Ontario’s second wave rises, or how high it rises.