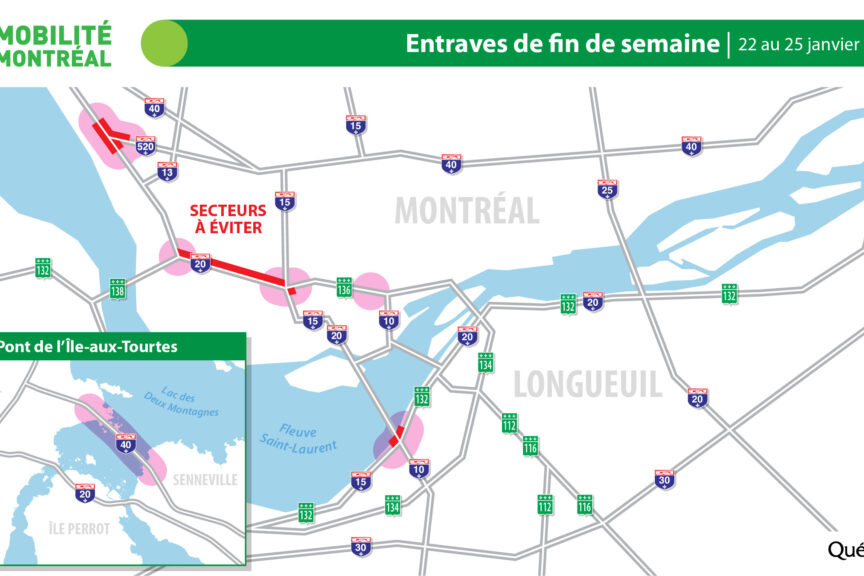 Most road closures are planned for the weekend of January 22 to 25 in the greater Montreal area, especially at the Tarkot, Saint-Pierre and Angignon interchanges on Highway 20, Highway 132 below the Samuel-de-Bridge Champlain and the All-Ox-Torts Bridge.

The most important closure of the weekend is Highway 20 West between Turquoise and Saint-Pierre Interchanges from 10pm on Friday to 5am on Fridays.

The ramps leading to this part of the highway will also be closed. At the Turquoise Interchange, the affected ramps are from Route 136 West (A-720), Autorout 15 North and Autorout 15 South (Decari) to Autorout 20 West, respectively.

On the east side, only two lanes are open between Boulevards Saint-Anne-de-Bellev and Angrignon. Central reserve lanes along the Route 20 and Route 136 (A-720) between the Saint-Pierre Interchange and the Water Exit (n ° 2) will be closed.

The ramp from Route 15 to Route 136 (A-720) to downtown will also be closed. The detour is via the following exit (Camin de la Cote-Saint-Luke) and Highway 15 South.

The MTQ recommends avoiding this area throughout the weekend.

Route 132 in the area of ​​the Samuel-de Champlain Bridge

At Brosard‌, Route 132 West closes completely under the Samuel-de Champlain Bridge, so between Exit 75 (Samuel-de Champlain Bridge and Highway 10) and the next entrance. The exit is open. Boulevard along the road is by-passed by Mary-Victorine. Eastbound, two of the three lanes are closed at the same time. These closures are from 10pm on Friday to 5am on Monday.

From 8:30 pm on Friday to 5am on Monday, two of the three lanes will be closed on the west side between Senneville and Vadroil-Dorian.

Highway 20 between exit 56 and lower entrances at the doorwall roundabout is closed in both directions. Roundabout access via Highway 520 was also closed. This work should continue until the spring of 2021.