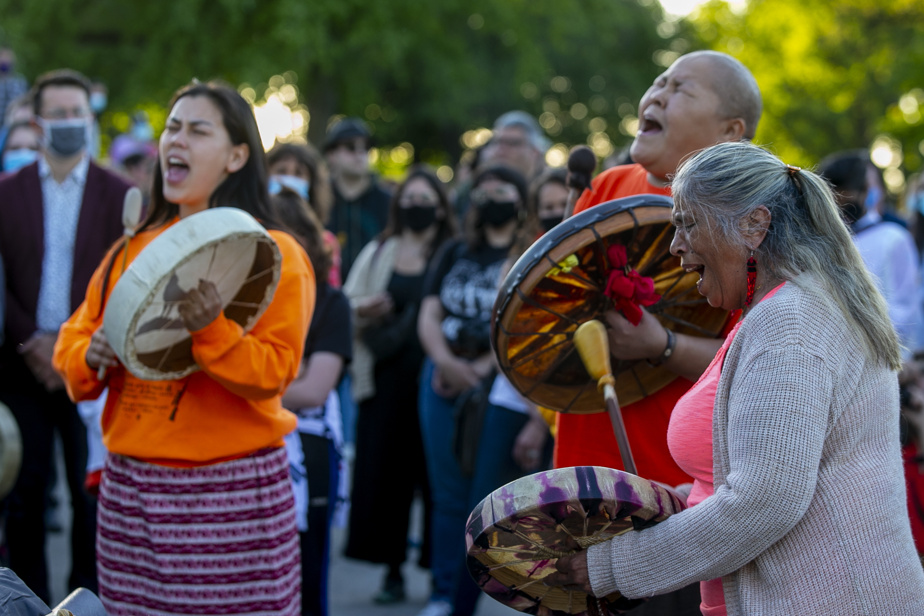 More than 200 people gathered Monday night at the foot of Mount Royal in Montreal to pay tribute to the memory of 215 children near a former Indigenous boarding school in British Columbia.

A moving tribute to the sound of drums and songs was performed by the organization and the homeless shelter Reliance Montreal.

Tears welled up on many cheeks during the one minute silence observed for the young victims.

The women placed posters in the shape of orange hearts, with the number 215 engraved on them. A little further on, a woman is burning incense in meditation.

Lisa Gagne accompanied her daughter Khamala Gagne Wabi to the event. “I am a worker. I have worked with a lot of people who have had post-traumatic shocks related to residential schools, ”Mr said.To me Won.

The woman belonged to a tribal community in Saskatchewan. She went there this summer, with her daughter, to reconnect with her culture. The mother and daughter went to a former Indian boarding school in the community, where family members stayed.

“Heard about these 215 kids …” Lisa Gagney’s voice sank with excitement. “Bodies were found wherever I lived. It’s all over Canada. That’s just the tip of the iceberg, “she added.

“It’s important that we look at this action, and see how we’re going to heal together. My biggest priority right now is not to repeat actions that hurt our youth,” said Aohahio Delisley.

The remains of 215 indigenous children buried last week were found near a former indigenous boarding school in Cumloops, British Columbia. Some of the bodies were the bodies of three-year-old children.