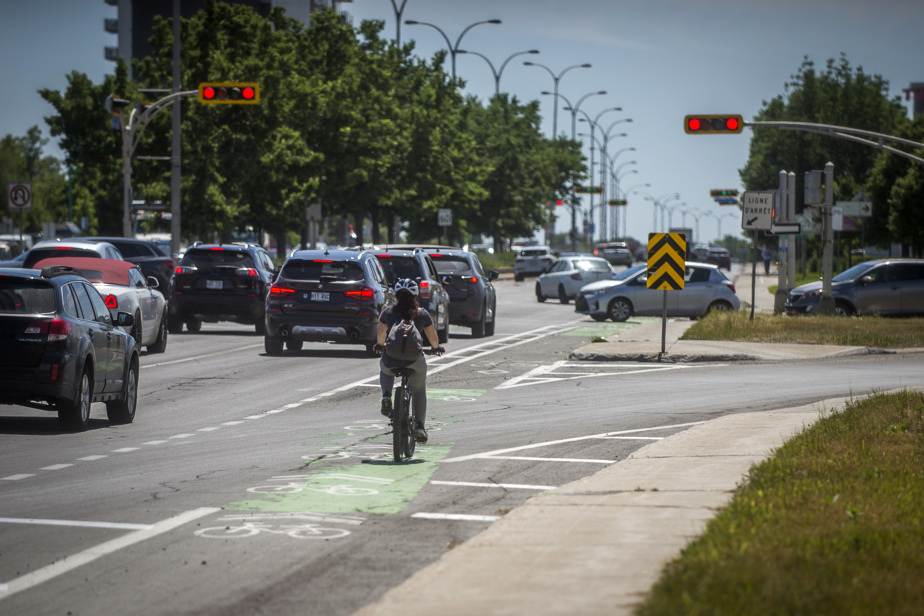 Despite an investment of tens of millions to build 113 kilometers of cycle paths since 2015, Laval residents have not yet gotten into the habit of riding their bikes. According to the statistics first obtained Tap, Is the king of the automobile in the third city of the province.

Friday, 8 p.m. While automobile traffic is intensifying on Boulevard Saint-Martin, traffic is fluid on the bicycle route. The intercepted cyclist, Carlos Cardanos, returns from work. “I only encountered a bicycle this morning, but it was not in Saint-Martin. Usually, there are one or two cyclists I meet on the boulevard, ”he said.

The Boulevard Saint-Martin (between Le Corbusier and de l’Avenir), built in 2017, will only attract a maximum of 258 daily customers on weekdays in 2020, according to a report by Velo Quebec in collaboration with Ville de Laval, which will be unveiled on June 22nd.

Ridership is awful for other new cycle paths in this city of nearly 500,000 inhabitants. Both the Boulevard Belleros and Avenue Louis-Payet‌ units were built in 2018, attracting 238 and 146 daily customers last week, respectively.

“I don’t know why there is so much resistance! », Laval also asks the city municipal councilor and Vasilios Caridogianis responsible for active activism.

Overall, the Laval Movement municipal councilor agrees that this increase is “not enough”, given the “increase in both utility and recreational bicycles across the network”. He agreed that the challenge was to change the cycling culture.

In Laval‌ it was not so easy. The city was built for motorists, it was built. Focus on taking your car to do stone throwing shopping from where we live. […] This is really the long-term lifestyle we are trying to change.

By 2020, the city said transportation in Laval‌ would account for 69% of greenhouse gas emissions. In 2016, according to the last Statistics Canada census, the share of commuters using bicycles as a means of transportation to work in Laval was 0.5%. In Language’s compilation, the share is 1.4%, and in Montreal 3.6%.

Laval went to great lengths to promote active consciousness. The master plan for the cycling network adopted by the City Council in 2019 plans to reach 475 km of bicycle lanes by 2031. 113 km from 2015. Investments in the three-year capital spending program from 2017 to 2020 for active mobility projects and traffic calming measures are over 15 million per year.

Laval resident Catherine Pilot has been cycling with her children for many years, but has not noticed the increased ridership. “The only change I see is that older tracks are being used more, but I haven’t seen much on new ones. […] Usually, when I take new sections, I stay on my own. ”

Ditto for Franకోois LaRoue, who uses a bicycle to get to work. “In the summer, the network is clearly not used,” he said. According to him, the culture of speed, difficult association with motorists and the cause of some intrusive arrangements. However, he does not believe the city has lost its target. “To say that they were not used and that it failed, I would not go that far. [Mais] I accuse the city of not raising awareness. ”

READ  Orange Zone: Evening skiing is widespread in some resorts News | The sun

Despite the “modest figures” in the Laval report, Velo Quebec’s president and CEO, Jean-Franకోois Realt, is confident that “over time, things will improve.”

It takes time to capture new behaviors, to realize the full potential of new infrastructure.

He said the telework factor linked to the epidemic should be taken into account.

Raise awareness among the citizens

Georges Schneller, a Laval resident who was one of the instigators of the Laval Cycling Reflection Group, believes there is not enough awareness. “When we think about building new tracks, we need to do promotions, awareness campaigns, events that connect cyclists to find new infrastructure. It goes without saying, ”he believes.

“Laval does more [de promotion] Than Montreal. More work needs to be done in Laval, because in Montreal, the cycling culture already exists, ”said Velo Quebec’s CEO, a subsidy program set up by the city for electric bicycles, as well as the establishment of six BIXI stations in its territory.

But the magic solution is not at hand, city councilor Vasilios Caridogianis agreed. “Even if we injected millions into the promotion, it would not be enough. […] We do not like to force people to use bicycles. I think it starts with small children. There are facilities, that’s a bonus. We start with the right foot, then education and promotion come, ”he concluded.