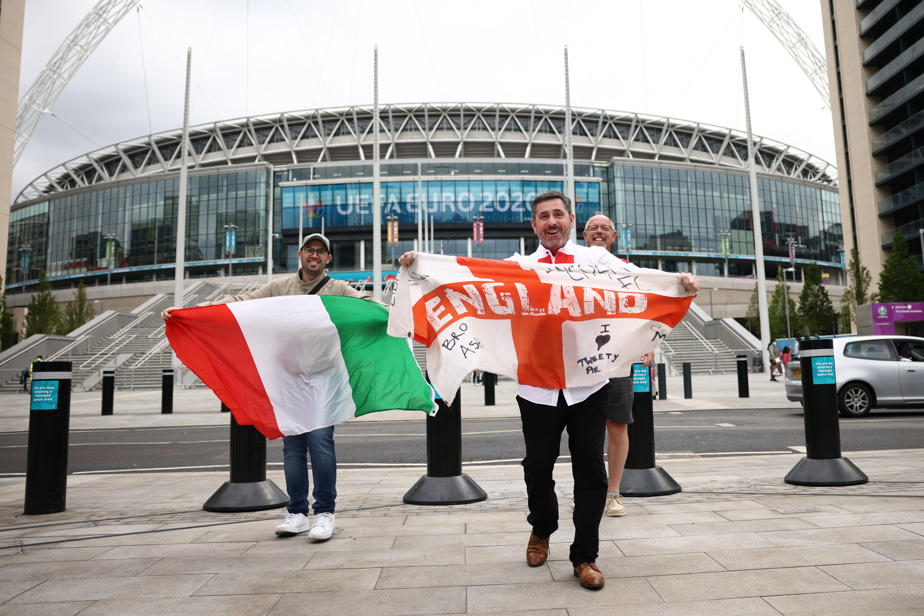 (London) Who employs soccer in Europe? The Battle of Wembley has promised to be an angry, noisy and exciting battle between England, with hopes rising as its supporters remain huge, and Italy eager to regain its glory, in the Euro final in London on Sunday.

Before this “D-Day”, the pressure increases, but the two opponents act as if nothing has happened. The English legs could not shake when playing the first final after the 1966 World Cup. The Italians did not think twice before confronting a heavily hostile people.

Such a peak, “It’s too big and it’s at Wembley, it’s even more special”, but defender John Stones “will not have sleepless nights” with the idea of ​​facing Nazionel. “We play at home, but it doesn’t scare us,” his vis-a-vis leonardo emptied the bonus.

However, the legendary stadium in north-west London has been waiting a long time for such a party. Under the leadership of Alf Ramsey, the Three Lions selection won their only major trophy by lifting the World Cup half a century ago.

England manager Gareth Southgate said on Saturday that midfielder Phil Foden would miss the final against Italy due to a toe injury.

“There is a doubt,” Southgate told the BBC. “We have to check again” because “he has a very minor injury to one foot,” he added.

“But the question is whether he will be restored in time to take part in the match, which we will have to assess later,” the England coach noted.

The Manchester City midfielder, who is a frequent substitute during this Euro, replaced Mount in the 96th minute of the semi-final against Denmark. He did not train with the Three Lions on Saturday without further aggravating an injury sustained in overtime.

In 1966, current England manager Gareth Southgate was not born. The sleek 50-year-old bearded man, with “British” sputum, is part of this generation, which only captures frustration. In the Euro 1996 semifinals, at the packed Wembley, he missed the final shot on goal against Germany (1-1, 5-6 tab).

The former player has suffered a lot of blame and insults for a long time, but this dark period is beautiful and well over. Now, English fans sing his praises in the subway, pubs or stadiums, inspired by the hit pop group Atomic Kitten’s “You’re the One”.

Although London police have strongly advised against random fan gatherings in the wake of the spread of COVID-19 cases linked to the more contagious Delta variant‌, the weather is guaranteed to be very festive on Sunday.

Wembley Stadium is expected to melt again in Wednesday’s overtime victory over Denmark (2-1) in front of a 64,950 crowd in UEFA.

On Sunday evening, the Italians will have to shout to be heard as less than 10,000 tickets are allotted to them. Most of these places will be occupied by Italian fans living in Great Britain. Only a thousand supporters from Italy are allowed to avoid the detention imposed on foreigners, who, if they provide a negative PCR test, take dedicated flights and respect the loneliness when returning.

More than Wembley, some Italians have criticized the penalty given to Englishmen against Denmark in recent hours, fearing that they might have a crush on English hosts.

“Disputes over the risk of unfavorable mediation do not respect our sporting tradition”, vacated Italian Federation President Gabriel Gravina. For Italian defender Leonardo Bonucci, there is no question of arguing: “We only think about playing soccer, having fun and bringing excitement. The rest is chatter, ”said the Juventus Turin player.

“Give the maximum and busta!” ”

At the age of 34, Bonucci survived with his defensive friend Giorgio Chiellini, who lost to Spain (0-4) in the Euro 2012 final.

Since then, Marco Verratti and Lorenzo Insignia have broken the odds of “Azzurri” failing to qualify for the catastrophic 2018 World Cup.

Victory over Spain (1-1AP, 4-2 Tab) On penalties on Tuesday, Italy, impressed by Roberto Mancini, now dreams of repeating the Portuguese feat in 2016, breaking France’s hopes and managing the country.

“Of course, by going to the finals, the stress and responsibility will increase, but you have to give your maximum and bust! There are no recipes, you have to give the best, ”said Dino Joff, goalkeeper of the 1982 World Champions and former coach of Nazionale.

However, the challenge against the England team, which is known for its iron defense, was enormous, caught only by the lack of a Danish free kick, whose attack was pulled by the formidable Kane and the elusive Raheem Sterling, and Mason Mount‌ and Jack Greelish, the tall leaders. Make your way to the grand end!