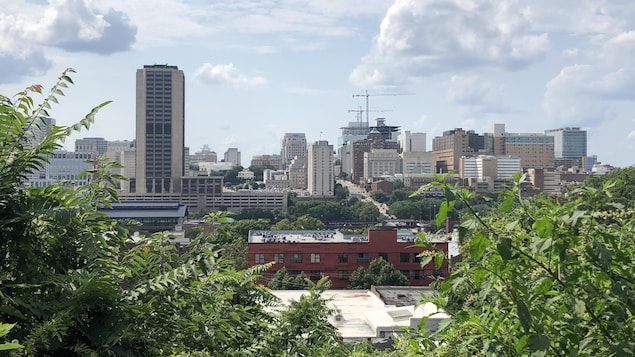 She chose to show us around two areas of the city: the Southside and the West End. Across the wide motorway boulevards, occupied by vast industrial lands, the first field is covered with large expanses of bitumen and weak leaves; Second, the affluent residential area, with its quiet streets, abundance of plants and beautiful houses.

Amy Wentz has been a resident of Richmond, Virginia since childhood.

As soon as we got out of the car, our guide caught our attention towards the bus stop on the edge of Richmond Highway. There are no bus shelters in sight, no bench to sit on, and no trees. If you have to wait 30 minutes here today it can be very painful, She cries.

However, this is something that hundreds of people have to do every day, as there are dozens of small houses just a few meters away from this busy road, which were built to house factory workers at the time. They still occupy today, mainly black families and, Latin Americans.

Richmond Highway on the south side.

It was very frustrating, Amy Wentz. No tree, no shade, no way to escape the heat. […] Those who live here are neglected.

The co-founder of the non-profit organization, whose mission is to make the voices of neighboring residents heard, has been working with the city of Richmond for the past two years to develop urban infrastructure appropriate to the name of Mrs. Wentz. . Many of the surrounding streets also have no sidewalks, asphalt is heavily damaged and street furniture is practically non-existent.

Take about ten minutes by car to the other side of the James River in the West End. Feet from the coveted Monument Avenue, the air is cool and the sun is hidden behind thick layers of leaves.

When there are more green spaces, more trees, it makes an incredible difference. It’s cooler, with more shade … good for your health. This is not really correct, She exclaims.

The inequalities highlighted by this short guide tour are large-scale, commented Jeremy Hoffman, scientific director of the Virginia Science Museum. Over the years, he has been tracking temperature differences from one district to another, from one city to another, and the results are sometimes spectacular.

Data collection conducted in 2017 and containing approximately 100,000 temperature readings made it possible to determine a temperature difference of up to 9 ° C in a single day, within the city limits of Richmond. Between one district and another district. This summer, he is participating in one of the largest Heat Island mapping companies ever held in the United States.

It is known that there may be temperature differences from one place to another in the same city, but we do not know the extent of these differences. […] I was very surprised to see the magnitude of these deviations, Hoffman explains.

In collaboration with other researchers, he repeated the experiment on several occasions and in several cities. The results are often the same: In colder places live richer people, mainly whites, and poorer people from minority communities in other parts of the city. Differences largely follow these dividing lines.

But where did these inequalities come from? In a pioneering study published last year, Jeremy Hoffman and two of his colleagues recorded the temperature differences recorded today. Redlining, The non-discriminatory practice of the 1930s, the loss of guaranteed mortgages on areas where investment was considered risky – mainly areas where African Americans lived at the time. Due to a lack of money, these neighborhoods gradually declined before road development was targeted in the 1950s and 1960s.

Most of these places are already in poor condition. So what happened? These neighborhoods were captured in the state where they were located. […] The thermal inequality we see today is the result of decisions made almost 100 years ago.

As part of this study, its results were published in the journal Weather In 2020, the authors observed temperature differences between neighborhoods in 108 cities in the United States. In 94% of cases, they concluded that areas were designated as less suitable areas for investment as part of the investment process. Redlining Temperatures higher than those observed elsewhere were recorded in the cities studied. Average deviation 2.6. Established at C.

Faced with this unreliable and annoying data, the city of Richmond decided to create a new weather equity index. This index classifies the city’s neighborhoods and areas based on approximately thirty criteria, directly or indirectly linked to environmental quality, making it possible to guide the decisions of the municipal administration.

This indicator allows us to objectively identify where infrastructure projects and municipal funding should go first to ensure that all our residents are protected from climate change.Municipality Community Engagement Coordinator Kendra Norel said.

Richmond also aims to give all its citizens access to a 10-minute walk or a short park or green space away from their homes. Currently, 70% of them have such access.

An area of ​​trees that will be converted into a park in Richmond.

To close the gap, the city is currently working on the development of five new parks, one of which is located in the southside sector. Ryan Rin, Parks Department Development Manager, said the 30-hectare Woodland Left Fallow will be converted into an urban park in the coming months.

If we do not face our past honestly, we run the risk of making the same mistakes again in the future., He reveals when he shows us around his chosen site.

Across the country, cities are becoming more sensitive to climate issues: We are trying to counter it. If we do not care about social justice and climate resilience now, we will not be ready for future challenges.

Jeremy Hoffman of the Virginia Science Museum is delighted to see the results of his work incorporated in this way into the city’s decisive processes. This data allows us to create an abstract reality – seemingly far away in time and space – into our backyard. Next, we can not ignore this.

Amy Wentz is also delighted to see her company being rewarded for its efforts. Looking at the greenery of the West End as our tour unfolds, she concludes: What they are saying is that people here should not have all of these; Because we deserve it too.