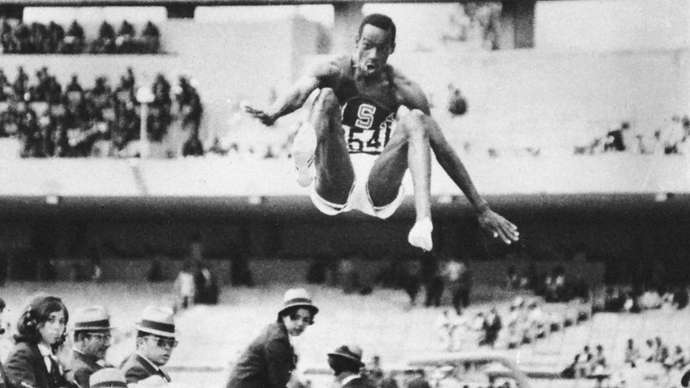 Born in Astoria, Queens, Al Oerter was destined for history-making Olympic greatness. When he was done with his track and field career, Oerter was considered and continues to this day to be viewed as the finest field athlete in the history of the sport.

In track and field circles, Oerter was known simply as Mr. Discus. Standing 6-foot-4 and weighing in at 280 pounds, Oerter was the prototype of the perfect thrower. At the age of 20, He qualified for his first Olympics, the 1956 Summer Games in Melbourne, Australia.

Oerter would win the gold medal in the discus in each of the next four Summer Olympiads. No track and field athlete in Olympic history had previously captured gold medals in four successive Olympic Games. Oerter’s history-making achievement would later be equaled by fellow Americans sprinter/long jumper Carl Lewis, as well as swimmer Michael Phelps. Amazingly, Oerter won all four of his gold medals despite never being favored in betting on the Olympic Games.

Oerter, a teenager, was still a student at the University of Kansas when he earned his spot on the U.S. team for the 1956 Summer Games. It would be the first time that the Summer Olympics were to be held in the Southern Hemisphere.

American Fortune Gordien entered that Olympiad as the most dominant discus thrower on the planet. He’d held forth as the world record holder for the majority of the previous seven years.

Oerter had never thrown the discus within six metres of Gordien’s personal best as they arrived in Melbourne. On his first throw of the final, Oerter unleashed an Olympic record of 56.36 metres. In fact, his second-best throw of the day was better than the silver medal-winning toss.

American Rink Babka arrived in Rome as the world record holder. In 1957 at the age of 20, Oerter was involved in a serious car accident that threatened to scuttle his career as a competitive athlete. However, he recovered in time to compete in Rome.

Oerter broke his own Olympic record in the qualifying round with a throw of 58.43 metres. During the final round, he bettered the mark again with a toss of 59.18 metres to win his second gold medal. In fact, all six of his final-round throws bettered his prior Olympic standard.

The Japanese city that is about to play host to the Summer Olympics first played host to the Summer Games this year. For the first time, Oerter arrived at the Olympic Games as the world record holder. He unleashed a throw of 62.45 metres to take possession of the record in 1962.

However, Oerter showed up in Tokyo a physical mess. A neck injury required him to wear a brace. A week before the Olympics, he tore rib cartilage. A third gold medal seemed unlikely.

Nobody bothered to inform Oerter of this, though. In qualifying, he again broke his Olympic record with a toss of 60.54 metres. In the final round, Oerter beat his mark once more, tossing the discus 61.00 metres to win his third gold medal. He was in such pain that Oerter opted to pass on his final throw of the competition.

This time, American Jay Sylvester was the overwhelming gold-medal favorite and the world-record holder (68.40 metres). He routinely threw further than Oerter. At 32, some wondered whether Oerter’s best days were behind him.

On his third throw of the final round, Oerter once more shattered his Olympic standard. He threw the discus 64.78 metres to win his fourth gold medal. He bettered 64 metres on three of his six final-round throws.

Oerter retired from competition following his 1968 Olympic win. However, at the age of 43, he decided to make a bid to earn a spot on the 1980 U.S. Olympic team. He finished fourth at the U.S. Olympic trials, despite unleashing a personal-best throw of 69.46 metres.

When the US joined the boycott of the 1980 Moscow Summer Olympics, Oerter did compete at the 1980 Boycott Games. He won the silver medal in the discus.