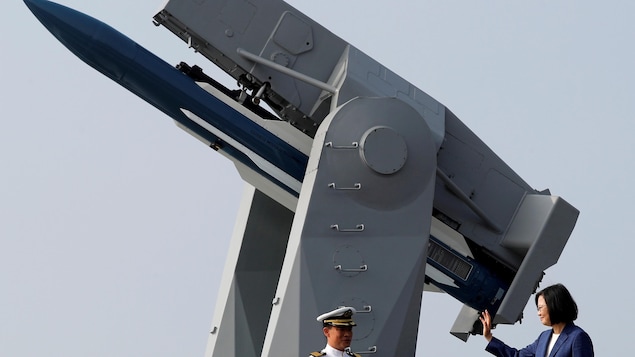 For the military, the current situation has been dark for over 40 yearsChiu Kuo-cheng told parliament.

He also warned one Slight negligence Or a Calculation error Can motivate A crisis In the Taiwan Strait, Beijing added that it could launch a full-scale offensive in 2025.

China Now she was able to, but she had to calculate the cost to pay and the result she wanted to achieve. After 2025, costs and losses will be reducedMr Chiu said without giving further details.

Taipei says it has recorded a record infiltration of 150 Chinese warplanes since Friday, including nuclear-capable H-6 bombers.

When asked about the situation, President Joe Biden told reporters on Tuesday that he had discussed Taiwan with his Chinese counterpart Xi Jinping last month.

We respect the Taiwan Agreement. We were there and we made it clear that I did not expect him to do anything other than abide by the agreement.

He made clear the American policy that had been in place since the transfer of US diplomatic recognition from Taipei to Beijing in 1979.

Under this arrangement, as part of an informal, non-diplomatic relationship, the United States would provide military equipment for Taiwan’s self-defense.

A spokesman for President Tsai Ing-wen said Taiwan had contacted Washington following Mr Biden’s remarks and was assured of US policy towards the island. Has not changed.

Ms Sai, who rejects a China principle, has increased her military, diplomatic and economic pressure on Beijing and Taiwan since she was elected in 2016.

(China) actions have severely damaged peace and stability in the region. In my opinion, restraint should be exercised to avoid potential conflicts due to miscalculations or accidents.

The president warned on Tuesday in the forum against “Catastrophic consequences” if the island falls In the hands of China.

The island wants peaceful coexistence with China, but she says If its democracy and way of life are threatened, Taiwan will do anything to protect itself.

His government has demanded that Beijing be stopped Immediate (his) peaceless and irresponsible provocative actions, Then Record infiltration of 56 Chinese military aircraft on Monday In the Taiwan Air Defense Identification Zone (ADIZ).

The Air Defense Identification Area is an airspace in which a state wants to identify and identify aircraft for national security reasons.

Taiwan’s ADIZ does not correspond to its territorial airspace, but meets part of China’s air defense recognition area and includes major territory.

In 2020, 380 Chinese Air Force aircraft were found in the Taiwan Air Defense Identification Zone and since the beginning of this year they have increased to over 600.