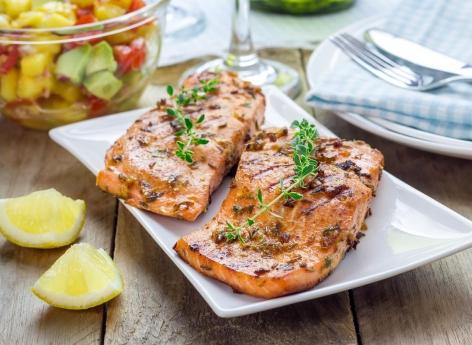 Rich in minerals and proteins, the best source of natural vitamin D and omega-3 fatty acids, low in calories and cholesterol, fish should be eaten regularly to stay in good shape.

Its nutritional properties make it a friend to our heart health as well as our brain. This was highlighted by a new study conducted by researchers from the University of Bordeaux and published in the Journal of Neurology. According to its authors, increased consumption of fish reduces the risk of cerebrovascular disease such as stroke and cerebral dementia.

Protective effect before the onset of brain disease

To reach this conclusion, the researchers examined 1,623 brain scans over the age of 65 without a medical history of stroke, cardiovascular disease or dementia. Participants also completed a questionnaire on their eating habits.

Participants were divided into four groups depending on how often they ate fish: less than once a week, once a week, two to three times a week, or four or more times a week. The researchers compared the number of signs of vascular disease between individuals in each group.

Results show that participants who say they ate more fish than those who ate less frequently showed less damage on MRI scans of their brain.

Between fish consumption and vascular disease it is stronger in people aged 65 to 69 years than in the elderly in the study. The researchers estimated that there was no significant relationship between the two in those over 75 years of age. These results suggest that fish may have a beneficial effect on cerebrovascular health prior to brain disease.

Although this is an empirical study, its results clearly show the positive effects of fish consumption on health. However, since participants only had one brain scan and reported their eating habits at any given time, it was uncertain whether the results were related to long-term brain health.