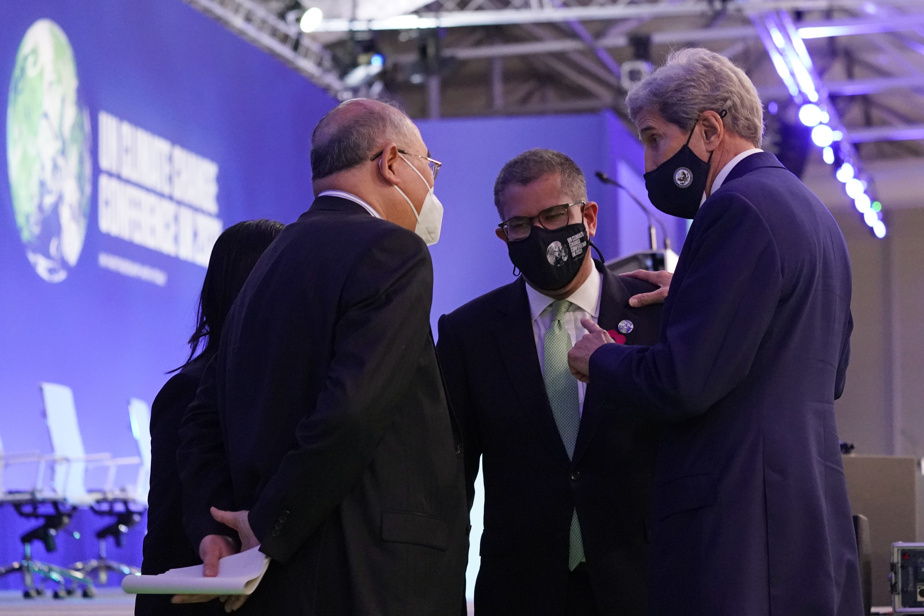 (Glasgow) The British presidency of COP26 sought to justify its project on Saturday, saying it “really gets things done”, but threatened to derail the conclusion of an agreement aimed at curbing global warming in a number of controversial issues, especially in helping poorer countries. .

The International Climate Conference is a “moment of truth” for the planet, its president Alok Sharma told a plenary session in Glasgow, Scotland, before a delegation of about 200 countries.

“The world has not kept the promises it made when the Paris Agreement was ratified in 2015.” This is a moment of truth for our planet and it is also true for our children and grandchildren, “he said. The final statement of the draft COP26 “recognized this fact and called for a response”.

The project contains “concrete steps for the future and very clear steps to bring us on the path leading to the goals of the Paris Agreement”, which aims to limit global warming to “well below” 2 ° C and, if possible, 1.5 ° C. Pre-industrial era.

Representatives from nearly 200 countries came to the end of two days of day and night discussions on greenhouse gas emissions limit, funding for developing countries, most affected by climate change, and many other issues.

In the eyes of the cameras – but without the noise – American Ambassador John Kerry and the Vice President of the European Commission spoke for several minutes with groups of various developing countries in the Plenary Hall, with COP26 President Alok Sharma waiting at the podium. .

“What we put on the table is a balanced package” and it “really gets things done for everyone,” the president finally announced, postponing the session until today.

After two weeks of marathon negotiations that have already lasted nearly 24 hours, London hopes to end COP26 on Saturday by limiting global warming to 1.5 ° C, by “keeping alive” the most ambitious goal of the Paris Agreement. Pre-industrial era.

The world is at a standstill, according to the UN, in the “catastrophic” trajectory of + 2.7 ° C warming. .

But it should not bring progress on the issue at the heart of these last days of negotiations, the economic shield to help poor countries – at least responsible for climate change but at the forefront of countering its effects.

Developing countries in particular have requested a specific mechanism to consider “damage and loss”, i.e. damage already caused by the devastating effects of rising storms, droughts and heat waves.

For Mohammed Ado of NGO PowerShift Africa, the text was “weakened” compared to the previous version published on Thursday, which was modified from a reference that was already considered minimal to the “technical” support system. He denounced the inaction of the British presidency as “rich nations rushing towards a system that leads to a platform of incessant gossip”.

According to sources close to many observers and negotiators, the proposal has been blocked by rich countries and especially the United States and the EU. “The EU is ready to help build bridges,” said Franz Timmermans, vice president of the European Commission.

Another highly controversial issue is the unprecedented mention in a text of fossil fuels, the main cause of global warming, which is also preserved in this third edition of the Draft Statement. Producing countries.

But from version to version, the scope of the text was reduced. He called on member states to speed up efforts to reduce coal-based power without “capture systems” (CO).2) And inefficient fossil fuel subsidies ”.

In particular, the first statement did not include the words “attempts” and “incompetence”.

“When some countries are trying to eliminate it, we have to fight like crazy to keep it in the text,” commented Jennifer Morgan, director of Greenpeace International.

Negotiations have been complicated by mistrust of poor countries, as rich countries have not kept their 2009 promise to increase their climate aid to the south to $ 100 billion a year by 2020.

The new text does not change the call for member states to gradually increase their commitments on greenhouse gas emissions beyond what is provided for in the Paris Agreement starting from 2022.

But with the possibility of making adjustments for “special national conditions”, the point added on Friday during the talks and provoked criticism from NGOs over the countries’ real intention to limit the rise in temperatures.

Delegates also want to come to the conclusion of negotiations on the use of the Paris Agreement, especially on the last remaining provisions on the performance of carbon markets. Negotiations in the last two COPs on this highly controversial article have failed.

READ  Charest wants to criminalize the blocking of critical infrastructure