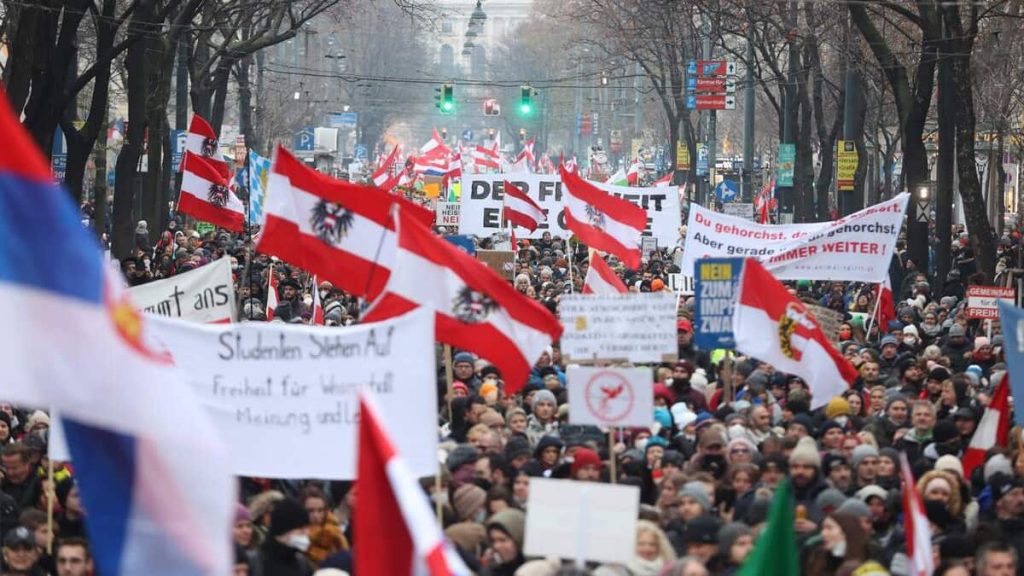 Tens of thousands of protesters gathered in central Vienna on Saturday after protests over several weekends in the country, already condemning the imposition of detention vaccines against COVID-19 and the denial of any injection.

Police estimated that about 44,000 people attended.

A total of 24 different rallies were planned in the Austrian capital, with the right-wing FP party organizing a “mega-show” exclusively near the Hofburg Palace.

Its leader, Herbert Kickle, has vowed to continue action “until the government gets in trouble.”

“Shame on our country”, “I’m not a neo-Nazi or a hooligan, I’m fighting for freedom and against the vaccine”, “No to fascism for the vaccine”, anyone can read the signs held by the audience.

One week ago, more than 40,000 people marched in Vienna and many more on November 20, following the announcement of a special detention vaccine project so far in the EU to fight the epidemic.

This week, the government revealed the details: the law will apply to all Austrian residents aged 14 and over from February 2022 (unless excluded for health reasons).

The vaccine is not forced, the text dictates, but refusing to comply with an individual can have legal consequences, with an initial fine of 600 euros, which can go up to 3,600 euros if not paid.

In addition, those who have not been vaccinated will be barred from going out if their detention ends on Sunday.

Manula, 47, from Lower Austria, and her AFP were both vaccinated twice.

“We may have different opinions and values, but we can live together freely,” said Analia, a 44-year-old violin teacher. “This is not the direction a democratic society should take.”