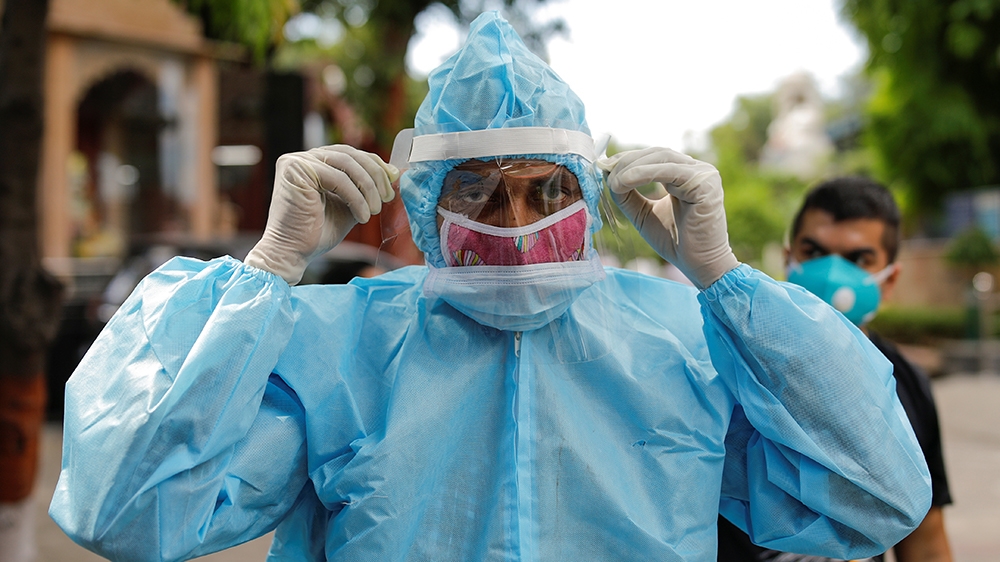 British Prime Minister Boris Johnson has told allies that “failure to reopen schools is not an option”, the Sunday Telegraph newspaper reported.

Earlier this month, Johnson said reopening schools in September was a social, economic and moral imperative, insisting schools would be able to operate safely despite the COVID-19 pandemic.

The Sunday Times reported this month that Johnson had ordered a public relations campaign to ensure schools open on time.

The country crossed that mark just 16 days after the number of cases crossed 2 million.

An update released by the health ministry showed the death toll stands at 56,706. In the last 24 hours, the country recorded close to 70,000 new cases.

Ministry figures show the western state of Maharashtra reported the highest number of cases in the country.

Hello, this is Linah Alsaafin taking over from my colleague Ted Regencia.

Germany’s Robert Koch Institute, which is monitoring the spread of infectious diseases in the country, has reported on Sunday at least 782 new cases of COVID-19, bringing the country’s total to at least 232,864.

At least 207,600 patients have recovered, which is equivalent to 89 percent recovery rate.

Australia’s state of Victoria reported another 208 new cases and 17 new deaths on Sunday.

But Victoria’s top health official, Peter Sutton, made an assurance that overall the situation remains positive, and that if the trend continues, he expects the daily numbers below 150 next week.

Confirmed cases increased from 947 on Friday to 1,071 on Saturday, with many infections confirmed in travelers who were tested as they disembarked from airplanes or ferries [Claudio Furlan/LaPresse via AP]

Vacationers returning to the Italian mainland from Sardinia helped push Italy’s daily new coronavirus caseload far past 1,000, reaching the high for the first time since early May.

Confirmed cases increased from 947 on Friday to 1,071 on Saturday, with many infections confirmed in travelers who were tested as they disembarked from airplanes or ferries.

Authorities in Lazio, the south-central region including Rome, say 45 percent of its 215 new cases Saturday were from people returning from Sardinia, where several clusters have been linked to discos or private parties on the posh Emerald Coast resort area.

While the average age of infection early in the outbreak hovered near 70, it’s now 30.

The agency also said that the death toll since the outbreak started in the city of Wuhan stands at 4,634 with no new deaths.

According to the government, 422 patients remain in the hospital with 16 of them in critical condition.

South Korea’s daily new virus cases spiked to 397 on Sunday – the highest since March 7- as infections were reported in all major cities and provinces across the country, according to Yonhap news agency quoting the health ministry.

Of the new cases, 387 were local infections, 297 of them in Seoul and the surrounding areas, according to the Korea Centers for Disease Control and Prevention (KCDC).

Health authorities said many of the new cases were traced to a church in northern Seoul and a massive weekend rally also in the capital.

The country, however, reported no new deaths, keeping its fatality at 309.

The government also said that there were 6,482 new confirmed coronavirus infections as of the end of Saturday, bringing the total number of cases to 556,216 cases.

The new coronavirus is circulating four times more among people under 40 in France than among over-65-year-olds, Reuters News Agency quoted France’s health minister as saying.

“We’re in a risky situation,” Olivier Veran said in an interview with France’s Journal Du Dimanche (JDD) published on Sunday, adding that the higher number of cases being detected was not solely down to more testing.

Like President Emmanuel Macron, Veran ruled out the need for another total lockdown to combat the spread of the disease. But he said localised measures could be taken as cases grow in France and elsewhere.

France reported a 3,602 spike in new COVID-19 infections over the past 24 hours on Saturday, a smaller rise than the previous day. Earlier in the week, however, the number of daily cases reached a post-lockdown high.

Brazil has reported 50,032 new cases of the novel coronavirus and 892 deaths from the disease caused by the virus in the past 24 hours, according to Reuters News Agency citing the health ministry.

Brazil has registered 3,582,362 cases of the virus since the pandemic began, while the official death toll from COVID-19 has risen to 114,250, according to ministry data from the world’s worst coronavirus outbreak outside the United States.

For all the key developments from Saturday, August 22, go here.